Read this small town, single dad romance with all the feels today!

Life in Dallas took a tragic turn for nurse practitioner Lila Daley. In need of a fresh start, she retreats to Papillon, Louisiana, a tiny town on the bayou. Sure she’s greeted by a gator, finds herself in the middle of golf cart wars, and unwittingly adopts a scruffy dog, but Lila remains undaunted. She’s focused on running the town’s medical clinic, but fitting into the quirky community is harder than she imagined.

As a single dad, Sheriff Armie LaVigne embraces routine. But there is nothing routine about the town’s newest resident. Lila is a gorgeous fish out of water and he’s ready to catch her. In fact, in no time at all, Armie knows Lila is the woman for him and he plans to win her heart. But when the past threatens their happiness, Armie will have to decide if he has the courage to trust Lila enough to find a true happily ever after.

What was the speed limit? It had been seventy earlier. He was pulling her over for going five miles over the limit?

With a long sigh, Lila maneuvered to the side of the road and put the car in park. Surely she could talk her way out of this. Small-town cops liked to ticket out-of-towners, and her car still had Texas plates. She would explain that she was a new resident and he could go back to his donut eating and preying on tourists.

She glanced in her side mirror. He was taking his time. Probably thought he could intimidate her. Well, he was in for a surprise. She’d worked with cops all her life. She could absolutely handle some paunchy small-town deputy who likely had taken the job because there wasn’t anything better to do.

The door to his SUV opened and then she was staring for a different reason.

A large man with intensely broad shoulders stepped out of the vehicle. He reached back in and brought out a hat that he settled on ridiculously dark hair that had more curl to it than she’d seen on a cop. DPD tended to keep it high and tight, but this man might be able to pull his back in a ponytail. No. That wasn’t the word. A queue. Despite the long hair, there was absolutely nothing feminine about the man walking her way. Swaggering.

He was probably six foot four, and if there was an ounce of paunch on that man, she couldn’t see it.

He was the man from Lisa’s wedding, the one who had slid her that sensual smile.

She shook her head and forced herself to focus. He wasn’t her type. She liked academic types. Nice men who were nonthreatening.

Boring. That’s the word you’re looking for. Boring and easily controlled so you can pretend that they can’t hurt you. How’d that work out for us?

A hard tap on her driver’s-side window brought her out of her inner monologue and she lowered the window. He wore mirrored aviators that covered his eyes. His jawline was sharp as a razor and there was a hint of sexy scruff coming in across his face.

Lord, the man was hot.

“License and registration, please.” His tone, however, was cold as ice.

It was the chill in his voice that allowed her to find her footing again. The man in front of her probably had twenty women dangling on his string, and a wife and kids at home, too. No man that hot didn’t. She could handle him. “Would you like to explain why you’ve pulled me over, Officer?”

He stepped back and for a moment she could have sworn he was surprised, but then she was sure almost no one would question this man’s authority. He recovered quickly, his hands going to those lean hips of his. “You were speeding. The speed limit on this part of the highway is forty-five. I clocked you going thirty miles over the speed limit. License and registration.”

“The speed limit went from seventy to forty-five? Are you kidding me?”

His lips curled up in a slightly crooked, wholly devastating smile. “That’s what speed limits do, ma’am. They go up. They go down. You look familiar. Have you been through town before?”

She wasn’t falling for his charm. Maybe invoking her brother-in-law’s name would work some magic on him. “I’m Lila Daley. Remy Guidry is my brother-in-law.”

That smile went flat, his whole body going back into cop mode. “The last time someone came into town looking for Remy, I got shot. You planning on shooting up the town?”

She winced inwardly. She remembered Lisa saying something about an incident that had led to a police officer being shot in the line of duty. “Sorry about that. No. I’m taking over the clinic in town. I’m your friendly neighborhood nurse practitioner. Next time you get shot, I will totally sew you up.”

He stared at her and she wished she could see his eyes. “You’re taking over for Doc Hamet?”

How to explain? “Sort of. I’m going to run the clinic, but he kind of supervises.” A handful of states let nurse practitioners handle their own practices, but Louisiana wasn’t one of them. Neither was Texas. She would have an enormous amount of freedom, but it would be in conjunction with the doctor who had served the parish for over forty years.

She intended to learn a lot from him.

“No. I’m a nurse practitioner. I’m like a general practitioner, but I can’t prescribe certain controlled substances. I can perform some surgeries. I spent over a decade working as a trauma RN before I finished getting my NP. I assure you I can handle the parish’s medical needs.”

“I don’t think you understand the parish, but I’m willing to help out. You have to be better than the doc we have now. You have to catch the man early or not at all, if you know what I mean.”

She gave him what she hoped was a friendly smile. “All right, then. Sorry about the misunderstanding. I’ll be on myway. I was hoping to get everything in the new house before it gets dark.”

She gritted her teeth and reached for her purse. “The only reason I sped up was to get away from that freaking alligator.” A thought occurred to her as she opened the Chanel wallet her brother had given her for Christmas. “Did you put that alligator out there as part of your speed trap?”

The sunglasses came off and she was staring into the bluest eyes she’d ever seen. Well, she’d seen them before, but not up close. They were even more devastating up close. “Did you accuse me of colluding with a reptile?”

His laughter seemed to fill her whole world. When that man lit up so did the sky around him. He doubled over, his laughter infectious. When he finally took a breath there was a chuckle in his words. “Oh, that is absolutely the best joke I’ve heard all day. Your sister never mentioned your sense of humor.”

Probably because Lisa didn’t think she had one. “Well, I’m known for my quick wit.”

He stared at her for a moment and she could feel the connection. It was like an invisible tether drawing her to him. She’d been right to run the first time she’d seen him. Something deep inside had told her she wasn’t capable of handling this man.

Didn’t want to handle a man like him, she mentally corrected.

Oh, you had it right the first time. That man wouldn’t let you be in charge all the time. He would challenge you.

Bully her was more like it. A man that gorgeous was used to getting his way.

But if it meant she would get out of this ticket, she could flirt a little.

He shook his head and sighed. “Unfortunately, you’re also known for your lead foot. License and registration.”

She bit back a growl because her first day in the new town wasn’t going the way she’d hoped. 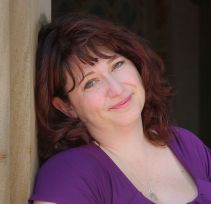 New York Times bestselling author Lexi Blake lives in North Texas with her husband and three kids. Since starting her publishing journey in 2010, she’s sold over three million copies of her books. She began writing at a young age, concentrating on plays and journalism. It wasn’t until she started writing romance that she found success. She likes to find humor in the strangest places and believes in happy endings.