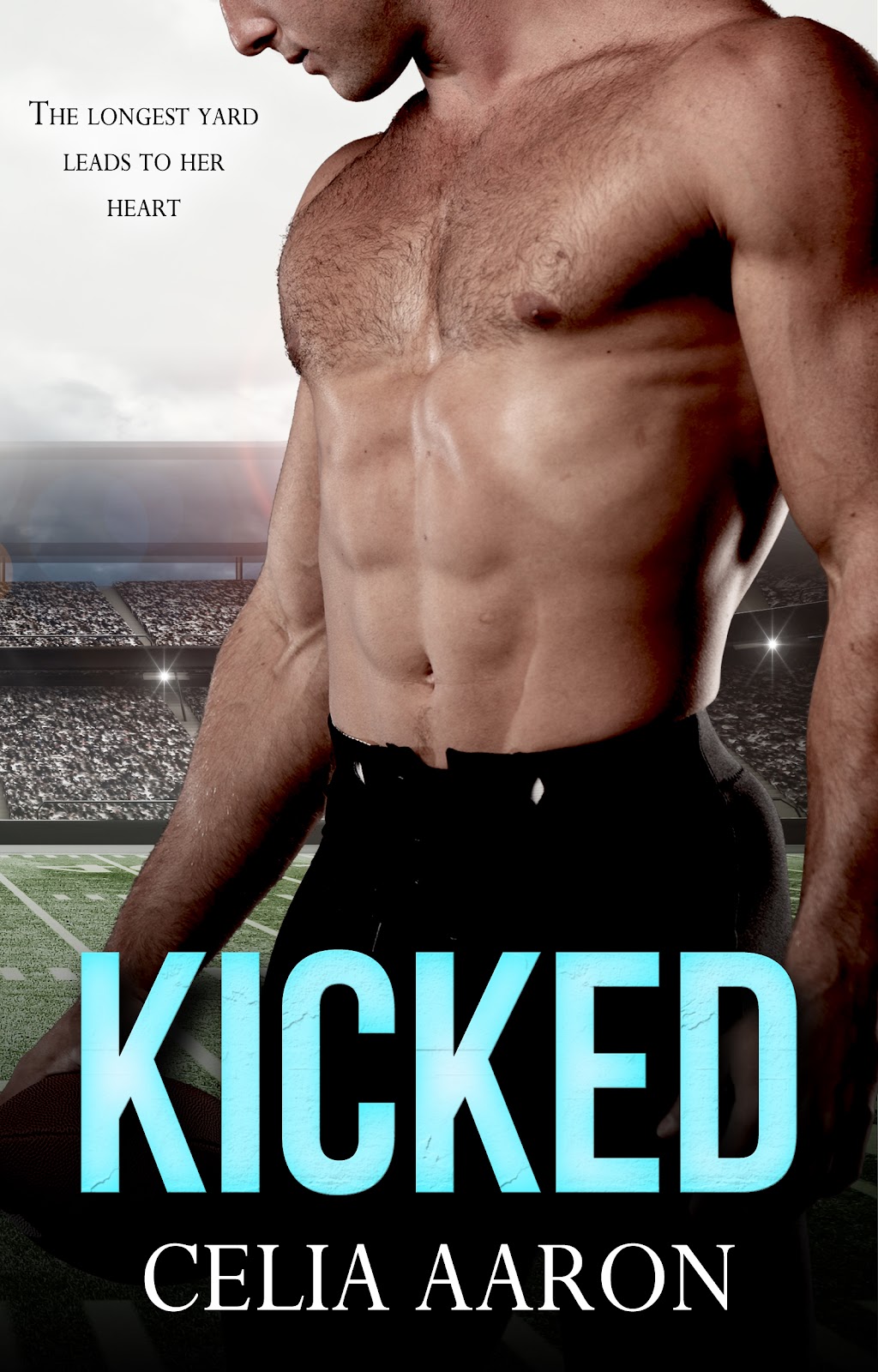 He’s the star quarterback, university scholar, and happens to be the sexiest man I’ve ever seen. He shines at any angle, and especially under the Saturday night stadium lights where I watch him from the sidelines. But I know the real him, the one who broke my heart and pretended I didn’t exist for the past two years.

I’m the third-string kicker, the only woman on the team and nothing better than a mascot. Until I’m not. Until I get my chance to earn a full scholarship and join the team as first-string. The only way I’ll make the cut is to accept help from the one man I swore to never trust again. The problem is, with each stolen glance and lingering touch, I begin to realizing that trusting Trent isn’t the problem. It’s that I can’t trust myself when I’m around him.

This is a full-length, standalone American football romance novel with hot guys in tight pants who really know how to handle their balls. 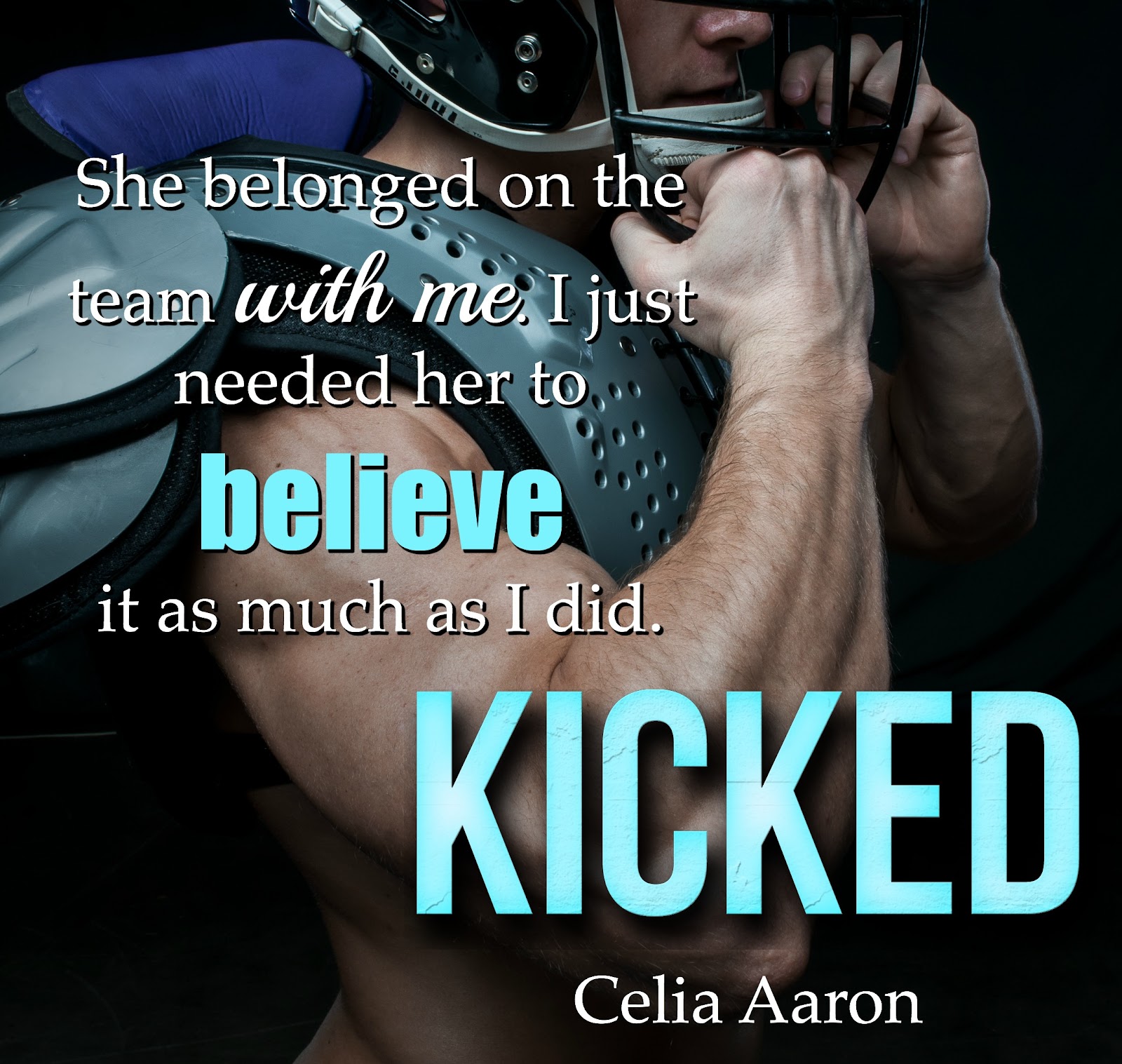 A movie started playing on the back of each seat, but I focused on Cordy. Her polo was unbuttoned, and I could see the swell of her breast. My cock went from fight mode to fuck mode in the time it took me to shift more toward Cordy.

“Are we…” She nibbled her lip.

I grabbed her chin and turned her to face me. “What?”

“Are we like, together?” She stumbled over her next words, as if she couldn’t get them out fast enough. “I know it’s too early to DTR—”

“Define the relationship.” She furrowed her brow.

Her gaze brightened. My phone buzzed again, but I ignored it.

“Someone’s calling you.” She glanced to my pants.

I’d told Cordy about the difficulties I had with my mom, but I didn’t go into the details of how much acrimony our relationship would stir up. Mom had no doubt seen the press conference. She would know. Mom always knew. She was waiting for me to pick up the phone so she could load me down with Carlotta’s tears, my family’s legacy, and the bright future she thought I was throwing away. I’d deal with it. Later.

I leaned close to Cordy’s ear. “Put your jacket on your lap.”

She turned to me, a wary look on her heart-shaped face. “Why?”

She arched a brow. “Not because I’m cold.”

“Because you—” She seemed to rethink her answer and, instead of responding, pulled her jacket into her lap as I’d requested.

“Good. My hands are cold.” I slid my palm along her thigh beneath the jacket.

She jumped and looked at me with a scandalized expression. “Trent!” She hissed through clenched teeth.

“What?” I pressed my fingers higher until I reached the apex of her thighs, then I eased my hand between her legs.

“We can’t do this here.” She glanced around, but no one could see us in the dark, and if anyone was looking, all they’d see was us sitting together and Cordy’s jacket in her lap.

I rubbed my index finger along the seam of her jeans over her clit. “We can.”

She gripped my wrist, but I didn’t stop. Her breathing grew faster as I stroked her. My cock demanded reciprocity, but it would have to wait. I wanted to pleasure her more than anything. When her lips parted, I knew I had her.

I pressed my lips to her ear. “Unbutton your jeans, and unzip them.”

She tilted her hips forward and did as I’d said.

“You’ll have to be quiet.” I ran my fingers along her quivering stomach and she let out a small sound.

I have to give kudos to Celia Aaron, she brought college football to life.  I was impressed with the fact that her “football star” was a female.  Celia Aaron’s knowledge of the game,tenacious research of the kicker position, and blow by blow descriptive plays made the book come alive.   The relationship between Cordie and Trent was the perfect push and pull kind of relationship readers look for in a new adult romance.

Cordie and Trent have a history.  They were skirting on a relationship two years prior to becoming teammates on the football team.  It was the typical rich boy and poor girl issues that kept them apart.  Cordie and Trent both walked away broken hearted.

Cordie is the first female kicker in college history.  She became the third string kicker to appease the equal opportunity regulation in college sports.  Her first love is soccer but personal finances have forced her to accept a partial scholarship in football.  It doesn’t matter because she is the MAV (Mascot With A Vagina ) rather than a valued player.  Fate has a way of stepping in and changing the rules of the game.  The first string kicker is injured and out for the season.  The first string kicker position is open and the team is holding walk on try outs.  This is an opportunity for Cordie to show her stuff and get a full time scholarship.  Trent volunteers to help her win this position.  He is going to train her and make her the strongest contender in the try outs.

Trent has ulterior motives.  It’s his second chance with Cordie.  He knows he screwed up two years ago.  He wants to make things right and make Cordie his own.

Cordie and Trent not only have to deal with the demands of the football team but also have to deal with every obstacle blocking their relationship.  There are so many obstacles coming in so many different directions.  They are going to have to fight for their love.

Kicked was very entertaining and put me in the mood for football season.  Celia Aaron did a stellar job writing this book.

Celia Aaron is the self-publishing pseudonym of a published romance and erotica author. She loves to write stories with hot heroes and heroines that are twisty and often dark. Thanks for reading.