The Harder You Fall Release Day Blitz!
𝗖𝗼𝗰𝗸𝘆 𝗳𝗼𝗼𝘁𝗯𝗮𝗹𝗹 𝗽𝗹𝗮𝘆𝗲𝗿𝘀, 𝘀𝗰𝗵𝗼𝗼𝗹 𝗿𝗶𝘃𝗮𝗹𝗿𝘆, 𝗮𝗻𝗱 𝘁𝗵𝗲 𝗴𝗶𝗿𝗹𝘀 𝘄𝗵𝗼 𝗴𝗲𝘁 𝗶𝗻 𝘁𝗵𝗲𝗶𝗿 𝘄𝗮𝘆.𝗚𝗲𝘁 𝗿𝗲𝗮𝗱𝘆 … 𝗧𝗵𝗲 𝗥𝗮𝗶𝗱𝗲𝗿𝘀 𝗮𝗿𝗲 𝗯𝗮𝗰𝗸 𝗳𝗼𝗿 𝗼𝗻𝗲 𝗳𝗶𝗻𝗮𝗹 𝗽𝗹𝗮𝘆!!!!
The Harder You Fall by L A Cotton is LIVE!!!
And to celebrate, L A Cotton is giving away a signed set of paperbacks and a $25 Amazon GC. Enter here >>> bit.ly/THYFGiveaway
➡️ Amazon: http://geni.us/ESTyReL
➡️ Apple Books: http://geni.us/qBSk
➡️ Nook: http://geni.us/5POYg
➡️ Kobo: http://geni.us/4UJHWG
➡️ Goodreads: http://bit.ly/HarderYouFallGR
🎧 Audio: Coming Soon!!!
𝗦𝘁𝗮𝗿𝘁 𝘁𝗵𝗲 𝗦𝗲𝗿𝗶𝗲𝘀:
books2read.com/TroubleWithYou
books2read.com/GameYouPlay
🏈
𝗔𝗯𝗼𝘂𝘁 𝘁𝗵𝗲 𝗕𝗼𝗼𝗸:
𝗠𝘆𝗮 𝗛𝗲𝗿𝗻𝗮𝗻𝗱𝗲𝘇 𝗵𝗮𝘀 𝘀𝗰𝗮𝗿𝘀.
The kind that run deep and leave marks.
Rixon is only supposed to be a temporary place to hide, but it’s quickly becoming something more.
She’s almost certain it has nothing to do with the blond-haired, blue-eyed football player who makes her laugh. Who makes her believe in fairy tales again.
Even if she knows her life is destined to be nothing more than a tragedy.
𝗔𝘀𝗵𝗲𝗿 𝗕𝗲𝗻𝗻𝗲𝘁 𝗵𝗮𝘀 𝘀𝗲𝗰𝗿𝗲𝘁𝘀.
Not the scandalous kind, but the ones that fester, slowly eating away at your soul.
On the face of it, he’s Mr Popular, always down for a party and causing a little mayhem.
But on the inside, he just wants someone to see him. Really see him. Too bad the one girl who sees past his facade has already friend-zoned him.
It’s probably for the best though.
She’s different.
A fighter.
She’s everything he wants but can never have.
Until Mya’s past and Asher’s present collide in ways neither of them saw coming.
I 𝗔𝗻𝗱 𝘀𝘂𝗱𝗱𝗲𝗻𝗹𝘆 𝘁𝗵𝗲 𝘁𝗵𝗶𝗻𝗴 𝘆𝗼𝘂 𝗻𝗲𝗲𝗱 𝗺𝗼𝘀𝘁 𝗶𝘀 𝘁𝗵𝗲 𝘃𝗲𝗿𝘆 𝘁𝗵𝗶𝗻𝗴 𝘆𝗼𝘂’𝗿𝗲 𝘀𝘂𝗽𝗽𝗼𝘀𝗲𝗱 𝘁𝗼 𝗵𝗮𝘁𝗲. 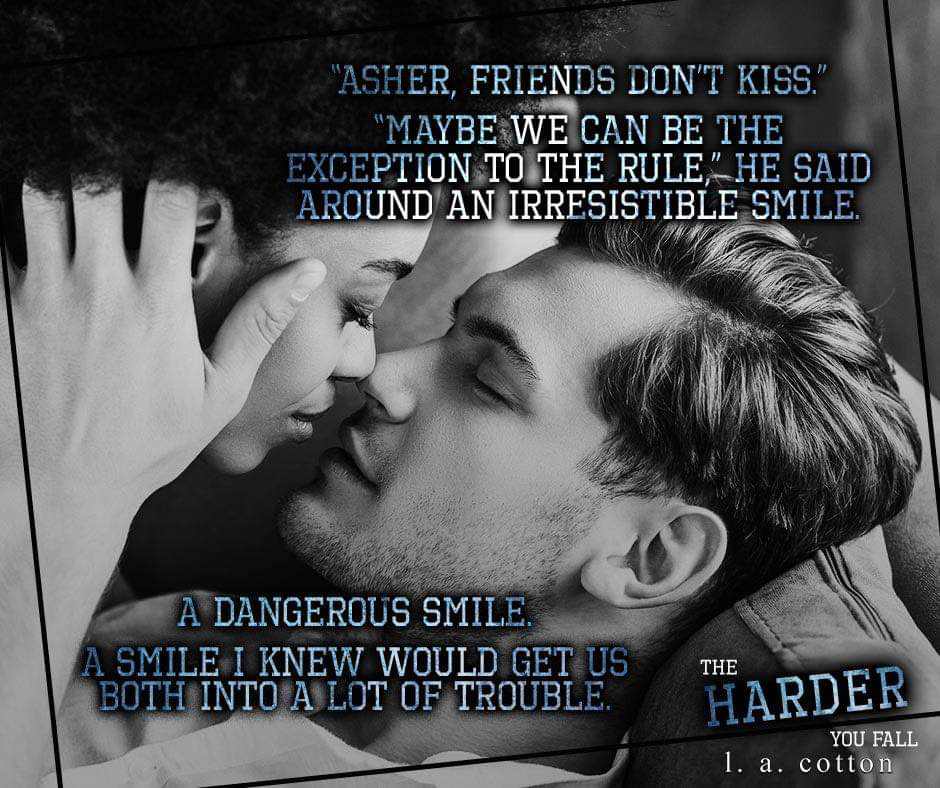 The Harder You Fall by L.A. Cotton is the third book in the Rixon Raiders Series and centers around Asher and Mya. Let me just say it’ll leave you even more enamored with Asher than you ever thought you could be.

From the very beginning I knew there was something uniquely special about Asher Bennet and can now confirm with 100% certainty he is my favorite Rixon Raider. The friend and teammate of Cam and Jase, Asher was the funny one who hid behind his quick wit and handsome looks. He grew up privileged, seemingly having everything he could ever want… but there’s a gaping hole.

Mya Hernandez is one of the 4% in Rixon and by 4%, I mean individuals of color. Feeling at odds with the town she’s in after escaping her past, she feels fortunate to have been befriended by Hailee and Felicity. She’s also caught the attention of one of the hottest Raiders, Asher.

What happens when two people from opposite backgrounds, but similar hearts come together? A love story like no other.

This story rocked me to my core. There was typical Asher humor, banter between the main characters, but there was so much more. This story packs substance and tackles some tough topics. There were tears, so get some Kleenex handy. This story was everything and the perfect way to start 2020.

I hate to see the end to this series, but I’m holding out hope that L.A. will deliver a novella to show a “fast forward” to what becomes of the Rixon Boys we love and their leading ladies.

ABOUT LA COTTON:
Angsty. Edgy. Addictive Romance
Author of mature young adult and new adult novels, L A is happiest writing the kind of books she loves to read: addictive stories full of teenage angst, tension, twists and turns.
Home is a small town in the middle of England where she currently juggles being a full-time writer with being a mother/referee to two little people. In her spare time (and when she’s not camped out in front of the laptop) you’ll most likely find L A immersed in a book, escaping the chaos that is life.
L A loves connecting with readers. The best places to find her are:
www.lacotton.com
www.facebook.com/authorlacotton
www.instagram.com/authorlacotton