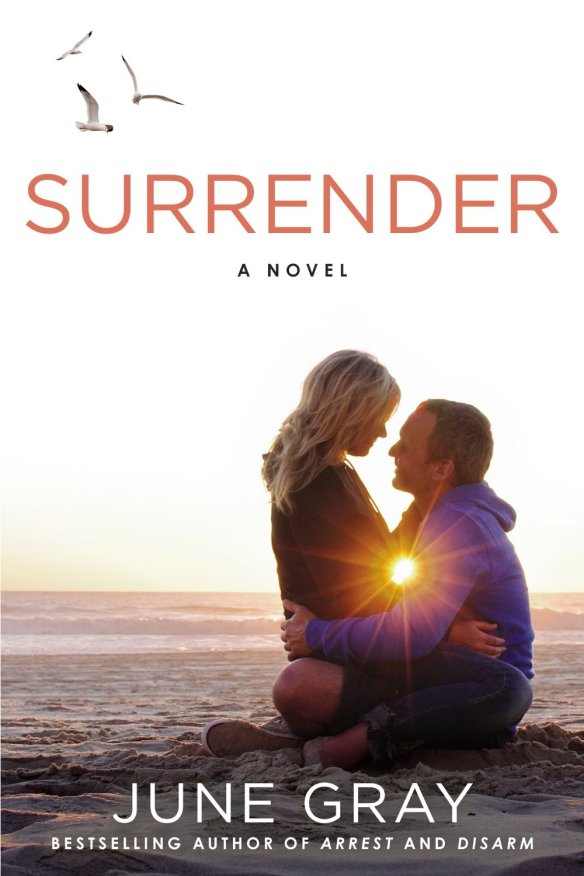 Julie Keaton had everything—she had a new career in a new city and, more importantly, a bright future with fiance, Jason Sherman. That is, until the day she discovered that he had been killed in Afghanistan. In one moment, her life changed, as everything she’d hoped for died along with him.

Years later and Julie still feels the aftershocks of Jason’s death. She is no longer the same adventurous, open girl; now she wears armor around her heart in order to protect the most important thing in her life—her son.

But when Julie meets the mysterious Neal, she starts to feel the smallest flicker of hope, as what began as a fling quickly becomes something more. Neal is the first man since Jason’s death to break down her armor and make her believe again. But when she discovers the secret he’s been keeping, she has to ask herself: can she surrender to a future with Neal or will Jason’s death forever tie her to the past?

Surrender is the latest release in the Disarm Series by June Gray. This novel can be read as a stand alone book or in series order. If you have not read the Disarm Series I would highly recommend this series. June Gray writes an adult romance that is emotional, sensual, and realistic. Her characters are dynamic strong people that are making the best of their lives the only way they can. They learn the true meaning of love, what is important in their lives, and grow as individuals. They are very easy to relate to. Each book flows beautifully and keeps the reader engaged to the very last word.

Surrender is a beautiful love story. It is about learning from past mistakes, moving forward in life, and learning to love unconditionally.

Julie and Jason were in a serious relationship. She was pregnant with his child when he was killed in Afghanistan while serving in the military. Julie is having a difficult time with her grief. She has a lot of regrets because she never told Jason how she really felt. She never told him she loved him. Jason accepted her for who she was and never let it hold him back from telling her how much he loved her. Julie regrets that Jason died not knowing how she really felt.

When she goes to Dallas for Eliza and Henry’s wedding , she meets a surfer on the beach. These two will stumble into a relationship that will be emotional and a true test of their spirits. Julie will have to learn to let go of her fears, express her true feelings, and trust destiny.

Neal is a carefree spirit. He lives in hotels, does freelance work as a computer programmer, and moves from place to place. He is a former Air Force vet that is still in the reserves. He doesn’t fear death and embraces life with open arms. He’s a firm believer that you have no control over your destiny. Death is part of life.

Julie has problems with Neal’s attitude towards life. She is fearful of losing another person that she loves. When she learns about Neal’s hidden secrets it gives her the perfect excuse to pull herself back and protect her heart. She does everything to push Neal away until she finds out that he has been called for another tour of duty. She is going to have to face her deepest fears. Can she overcome these fears and let Neal know how she really feels? Can she give Neal her heart knowing he may not return? Is love worth it? Can she get a message to Neal in time?

This book was so emotional. Both of the characters had valid reasons for living their lives the way they did. When destiny brought them together, it was for a purpose. Together they could overcome their fears, their shortcomings, and become better people. They learned that what is in the heart is the true meaning of happiness. They learned to live life every single moment with love.

I highly recommend the Disarm series by June Gray. It is superb. Surrender is another fantastic addition to this series.

June Gray is a daydreamer who, at the age of ten, penned a short story inspired by a Judy Blume novel and has been unable to stop writing since. She loves to tell stories that titillate and enrage, that break the reader’s heart and put it back together again.

Her fairy-tale life has been lived on four different continents—most recently, in a two-hundred-forty-year-old castle in rural Germany owned by a Graf. She was born in the Philippines, raised in Australia, and now calls the United States home, and she can currently be found enjoying the shores of Miami with her husband, two daughters, and a miniature schnauzer.