Release Date: November 14, 2021
Vi Keeland and Penelope Ward are excited to bring you the Cocky Hero Club: original works from various authors inspired by Keeland and Ward’s New York Times bestselling Cocky Bastard series.
BLURB
I hate Harry Stone.
Before I’d even met the selfish former pro hockey player turned CEO, he was at the top of my shit list.
The entire city of Chicago thinks he’s God’s gift to humanity, but I know the truth.
He knocked up my best friend and then ditched her when she needed him most.
She got sick after that, and before she passed away, she chose me to raise her newborn daughter.
I just need Harry to sign away his rights to the little girl who means everything to me.
Unfortunately, it’s not quite that simple.
To stay in his daughter’s life, I end up moving in with the man I detest. Loathe. Despise.
Hating Harry Stone is the easiest thing I’ve ever done.
But slowly discovering a way to not hate him?
Now that, I didn’t see coming.
Pompous Player is a secret baby/enemies to lovers/sports romance inspired by Cocky Bastard.
ADD TO GOODREADS 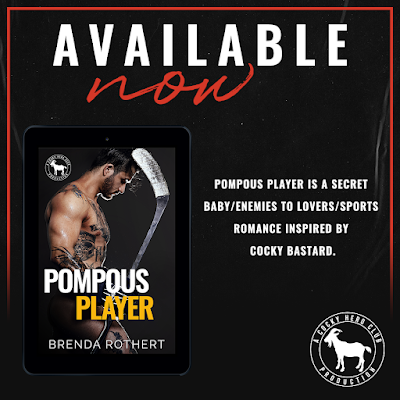 Tracey’s Review
Winter Stevens never thought that she’d be raising her best friend’s daughter with no help from the father that left her friend when she needed him most. Harry Stone, sports legend, veteran, philanthropist, and, oh yes, player extraordinaire. Winter hates the very mention of his name, and when Harry comes back into the picture, she’s sure that he’s up to no good. But people aren’t always what they seem…

It’s always nice to return to a book world that I’ve enjoyed in the past. As a very happy fan of both the Cocky Hero world created by authors Vi Keeland and Penelope Ward, and the books of Brenda Rothert, it was a pleasure to read POMPOUS PLAYER, Brenda’s contribution to the Cocky Hero Club.

Harry Stone may be one of my favorite of Brenda’s hockey men. Not only has he been a member of the Chicago Blaze hockey team, he’s also served his country, and gone on to continue to help others. Pretty much the whole package, unless you’re Winter Stevens, and you’re convinced that he’s the most selfish jerk you’ve ever met. But the Harry that Winter meets isn’t quite what she was expecting, and it’s not long before she’s having to take a good long look at the man that he actually is now.

Brenda works her usual magic here, crafting a story that takes two very different people and brings them together. Winter and Harry are more than they appear to be, and, once they start working as a team, there’s no stopping them and their feelings.

POMPOUS PLAYER is a nice addition to both the Cocky Hero world and the world of the Chicago Blaze. Sparks, sass, cooperation, and, finally, love, are all on the menu in this book, and Brenda brings it all together to give us an ultimately heartwarming and feel-good read with some spice for the win. A very enjoyable read, and one that I’m happy to recommend. ❤️ 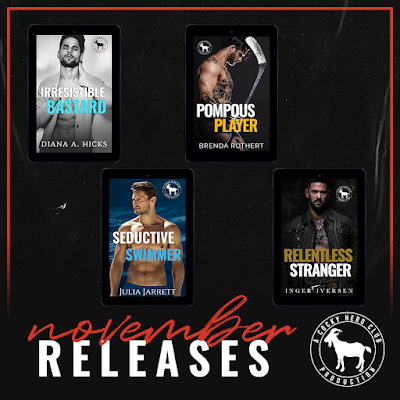 AUTHOR BIO
Brenda Rothert is an Illinois native who was a print journalist for nine years. She made the jump from fact to fiction in 2013 and never looked back. From new adult to steamy contemporary romance, Brenda creates fresh characters in every story she tells. She’s a lover of Diet Coke, lazy weekends and happily ever afters.
AUTHOR LINKS
WEBSITE
GOODREADS
AMAZON
BOOKBUB
NEWSLETTER
COCKY HERO CLUB